Lake Conestee Nature Preserve opened in 2006, and over the past ten years has become a favorite destination for families across the Upstate.  The preserve boasts 12 miles of trail that crisscross 400-acres of forest and wetlands. With multiple entrances and all those trails, it can be intimidating to head off the beaten (or paved!) path at Lake Conestee Nature Preserve. However, we hope this guide will give you the confidence to more fully explore all that Conestee has to offer with your family!

Since the coronavirus pandemic, the Lake Conestee Nature Preserve has instituted important new rules, including no dogs or bikers on natural surface trails.

First and foremost, it is easy to confuse Lake Conestee Nature Preserve (LCNP) with its neighbor, Conestee Park.  Managed by Greenville County Recreation, Conestee Park has an enormous playground, stadium, baseball fields, dog park and picnic shelter. We often incorporate a stop on the playground before or after a hike in the nature preserve.  For more about Conestee Park check out Kidding Around Greenville’s mom review of Conestee Park.

The multiple parking lots in Conestee Park are your best bet on weekends when the other, smaller lots might be full.

Tip: Conestee Park has three separate restroom facilities that will probably be your closest restroom while on the trail. From the county park there are four different entrances into Lake Conestee Nature Preserve known as the east entrances (accessible from Mauldin Road).  E1 (East entrance 1) is near the dog park and is the north entrance to the popular Racoon Run trail, which runs on the east bank of the Reedy all the way to south of the baseball diamonds. E2 is the Reedy River bridge entrance, which connects with the heart of the preserve; the bridge is the only way across the Reedy River within LCNP. E3 is at the end of the parking lot that is south of the stadium, and E4 is next to the baseball diamonds; it leads to Forrester Farm, the East Bay and the other end of Raccoon Run. Other trails on this bank of the Reedy include Sapsucker Spur, Coyote Cut-Thru, Chickadee Link and Dragonfly Way. These trails (with the exception of the E2 trail that leads to the bridge) are not stroller-friendly, and mostly serve as access points to Raccoon Run (except Dragonfly Way, which is a nice loop around Forrester Farm near the end of Raccoon Run, adding ¼ mile to your route).

The south end of Lake Conestee Nature Preserve is off Conestee Road. At the point where the road crosses the Reedy River there is a good view of the Historic Lake Conestee Dam which once powered Historic Conestee Mill. After crossing the bridge turn right on one-way Spanco Drive; this is where the parking lot for the first south entrance (S1) is; it’ll be to your right just after passing the mill. S1 is the southernmost point of the Swamp Rabbit Trail and features a picnic area, the trailhead, and gorgeous views of South Bay.

Another access point, S2, is at South Pine Circle and Conestee Road. Rusty Link serves as a connector to the Swamp Rabbit Trail; these are the only trails on the south end of the preserve. As the Swamp Rabbit Trail curves around South Bay and up north past Crescent Slough to the heart of the Nature Preserve, you’ll find a couple of observation decks that are great places to rest while you look out over the water. 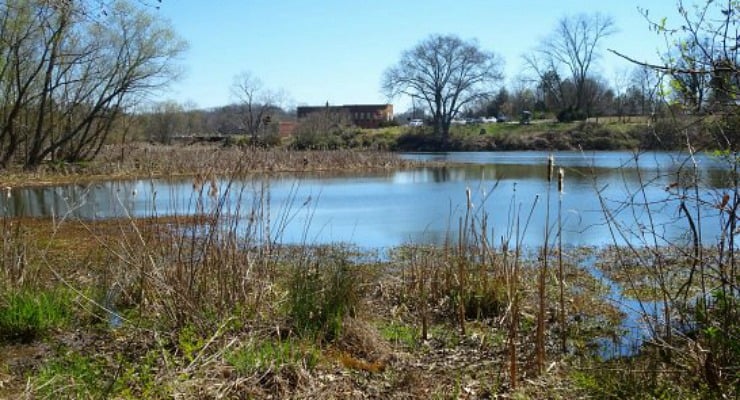 The Swamp Rabbit Trail cannot follow the Reedy River through the center of the preserve as it is mostly wetlands and open water. Instead, it loops around Bone Marrow Creek to the west end of the preserve, in two spots utilizing boardwalks to cross the creek and sections of marsh. There are four entrances on this side. W1 is next to the Belmont Fire Station, but it is very important that you only use the LCNP parking; if it is full, head to the W2 entrance which is the LCNP office at 601 Fork Shoals Road. Here, in addition to the parking lot and picnic area you’ll find restrooms (if the office is open) and trail access to the Swamp Rabbit Trail and Henderson Farm via the Stone House Spur and Spring Lizard Link trails. Further north the W3 access point is at Chatham Drive and Henderson Avenue, and then there’s a parking lot at W4 (Meadors & Henderson Avenue)– although the gate isn’t always open.

The west area of the park features several miles of trail. The Stone House Spur and Swamp Rabbit Trail are paved, perfect for cycling and strollers, while the other trails such as White Tail and Flat Tail Trail (which connects to the fire station) are dirt trails. Several picnic areas and viewing overlooks are scattered throughout, offering scenic views of Marrow Bone Creek and the Henderson Farm meadow.

The north area is actually a separate unit from the rest of the preserve, and is accessible from the parking area N1 at 415 Churchill Circle. The Swamp Rabbit Trail connects the north section to the west portion; follow the signs on Churchill and Chatham from N1 to W3. N2 is the other access point, marking the north boundary of the preserve at Brushy Creek. From here the Swamp Rabbit Trail proceeds north along Reedy River to Parkins Mill Road and I-85. Hopefully this missing section will eventually be completed to connect to where the SRT picks back up again at Cleveland Street and Pleasantburg Drive, but until then cyclists looking to connect the two must use Parkins Mill Road and Cleveland Street, two rather busy roads.

There are only two trails in this section of the preserve; Tree Frog Trail hugs the Reedy River for most of its 0.8-miles, looping around to connect to the Swamp Rabbit Trail which cuts straight through Breazeale Farm.

Finally we are left with what I call the heart of the nature preserve, the area bordered by the Reedy River to the east and the Swamp Rabbit Trail to the south and west. This section is mostly wetlands, with boardwalks and trails extending on all sides around West Bay and North Slough. It includes Sparkleberry Island and the River Otter Way and Froggy Bottom Link trails, the rest of Flat Tail Trail (which originates at the Fire Station on the west end), the Sparkleberry Connector (paved trail running from the bridge to the Swamp Rabbit Trail) and various connectors such as Gray Fox, Turtle Run and Possum Run. The highlight of this central area are the observation points.  The “Birdnest” observation deck and Heron Spur (features #9 and #11 on the map) on opposite ends of West Bay offer great views of the Great Blue Heron nests in the center of the bay, while the learning loops and teaching areas on Sparkleberry Island tell the history of the area and introduce visitors to the animals and plants that call Conestee their home. Other than hiking and biking, there are many other fun things to do at Conestee Nature Preserve.  LCNP is one of our favorite destinations for birdwatching.  The National Audubon Society has designated the preserve as an Important Bird Area of Global Significance, and over 220 bird species have been reported by the Greenville County Bird Club. You can join the Greenville County Bird Club on a guided bird trip in the preserve on the third Saturday of every month.  The nature preserve also offers a multitude of educational opportunities.  For a list of field trips offered for homeschoolers, schools and other groups, please visit their website.

But there is one thing you don’t want to do at Lake Conestee Nature Preserve, and that’s go swimming.  The lake was created when the Reedy River was dammed at the Conestee Mill in 1892. The lake originally covered about 130 acres, but over the years industrial waste and discharge filled about 90% of it with sediment so toxic that the lake was classified a Superfund site. Safety studies of the brownfield site were completed, and it was determined that the best course of action would be to leave the toxic sediment in place. For more information, please visit the LCNP website.

For those interested in finding out more about the history of the area, the Lake Conestee website is the perfect place to start.  Everything you need to know before you visit can be found here and an excellent map of the trails is here .

Lake Conestee Nature Preserve relies on donations to continue running.  If you would like to make a donation, you may do so here.

What is your favorite place to visit in Lake Conestee Nature Preserve?

This article was originally published on Femme au foyer.

Mother of four young boys, Liene is constantly on the move since returning to Greenville in 2012. Whether she’s exploring the state parks and natural areas of the Carolinas or teaming up with other moms to organize activities for the kids, she’s always searching for the next adventure in the Upstate. For everything from hiking, travel, cooking and crafts to multicultural & global education posts, visit her blog, http://FemmeauFoyer2011.blogspot.com.