Need a unique date night idea? How about a great night out with friends? Or maybe you just love good food. Today KAG contributor Kristina Hernandez is telling us about a unique tour you can take in Downtown Greenville, called At the Chef’s Table Culinary Tour. On this tour you’ll enjoy great food, learn about the food and people who prepare it and hear unique tidbits of Greenville’s history.

Thank you to John Nolan for providing this tour in order to allow us to share a review with you.

Just. One. More. Bite. My eyes were fighting with my full stomach as I stared down the dark chocolate tart at The Lazy Goat, the last of what amounted to a five-course meal of Table 301 restaurants in downtown Greenville. Over two hours earlier, I had met other excited participants for John Nolan’s At the Chef’s Table Culinary Tour at Soby’s on the Side, ready and willing to experience the highly-rated walking food tour.

I made it this far and just gave in, savoring just one last bite of the delicious dessert. Tasting and Learning on the Chef’s Table Culinary Tour

Local author and historian John Nolan has a passion for both history and food and he decided to combine them for a walking tour of some of downtown Greenville’s best restaurants with interesting historical tidbits thrown in, along with old photographs he carries around.

Greenville’s restaurant scene has exploded, to put it mildly, over the past several years. The area has extraordinary chefs, creative and innovative, who use both local and international ingredients to create memorable dishes for patrons. Table 301 restaurants include Soby’s, Soby’s on the Side, Passarelle, Papi’s Tacos, The Lazy Goat, Nose Dive and a catering company. This tour went to all of them except Soby’s, and delivered big time on flavor and experience. John has been doing this particular tour for about four and a half years and has rarely had the same dish twice. It’s the perfect adventure for date night or enjoying time with friends.

Cooking Lesson at Soby’s on the Side

Feeling a bit like a kid sneaking into the kitchen for a snack after everyone had gone to bed, our group of eight headed to the back of Soby’s on the Side for a cooking demo with then-Executive Chef Todd Warden. John popped the cork on a bottle of white wine and we settled in to see how the magic is made in the Southern classic, shrimp and grits. While sautéing Andouille sausage, Chef Warden revealed his love of Geechie Boy Mill grits, how he graduated from Johnson & Wales in only a year and why using extra virgin olive oil should only be used as a finishing oil and not as a cooking oil. 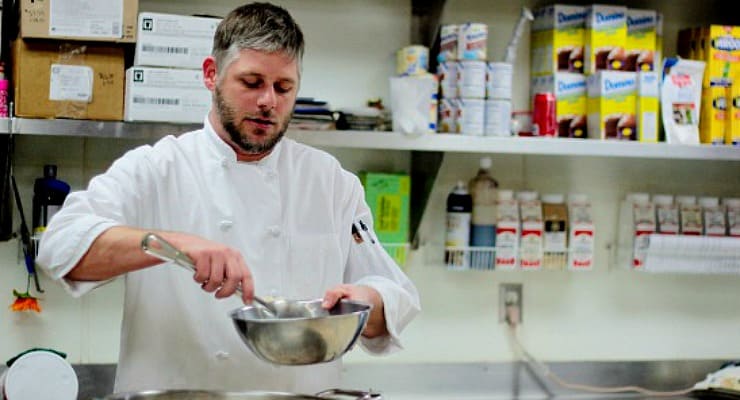 While John helped to portion off the grits and put the shrimp, cream and Andouille sausage mixture into the serving dishes, Chef Warden oh-so-casually slid a tray of crispy poached eggs out onto the table. What?! I had never heard of such a feat. Poached eggs aren’t easy to pull off. What amounted to a fried poached egg blew everyone’s mind and we all demanded to know how he did it. The humble chef revealed his secrets while we enjoyed the amazing dish. The textures and flavors balanced so well together that I couldn’t see how any of the other restaurant stops were going to top this.

Off to the Nose Dive

On our way to the gastropub, John showed our group a photo of what used to the center of town in Greenville, which was initially named Pleasantburg. There is a statue near there of Vardy McBee, the “Father of Greenville.” He bought over 11,000 acres of what is now downtown Greenville and donated a lot of it for churches and schools, essentially giving the town its start.

Upon entering the Nose Dive, our group was ushered through the restaurant to the very back and quite private room, all set up with glasses of craft beer. A hoity-toity steakhouse used to occupy this space until they could no longer operate when the recession hit. So The Nose Dive took up the space and wanted to be a more casual joint but with exceptional food and drink, hence the new place which is known for its craft beer list, burgers and chicken sandwiches.  When they were redoing the restaurant, the owners tore up the carpet and found green and white tiles, which were actually the original floor of the old Belk’s, which was housed there in the 1940s. That piece of history has stayed with the Nose Dive, which you can easily see walking through the restaurant.

This night we were served mac & cheese with crispy bacon and sunflower sprouts along with a New Belgium IPA beer. I could feel the mac and cheese giving me a little hug. I love Southern comfort food.

Rolling Down the Reedy River

Our next stop was thankfully a little walk away, over the Reedy River and down to the little French bistro, Passerelle, right next to the Liberty Bridge. This place is adorable – small tables, cozy lighting – total bistro experience.

Our table was ready when we walked in and set with a white Bordeaux French wine. Servers brought over Ratatouille, a hot dish consisting of a coddled egg over vegetables in a light tomato sauce. This dish was heavenly. Every bite was so flavorful, yet filling but not heavy. Teryi Youngblood, the Chef de Cuisine, was a former pastry chef at Soby’s but her love of French cuisine shines through at Passerelle. Heading down below the Liberty Bridge and next to the Falls, our group started walking towards Papi’s Tacos. But John stopped and explained that we were standing really close to the some of the oldest ruins of Greenville, part of Vardry McBee’s early 1800s grist mill next to the river. He showed us an old photograph and pointed out where the foundations still stood. Pretty cool.

Papi’s Tacos was closed – but not to us! The general manager, who also manages the Lazy Goat above the taco joint, described how Papi’s Tacos came to be: Jorge “Papi”, a Mexican national, started working for Table 301 15 years ago and would often make food from his home country for his co-workers, who loved it. So they thought, hey, Papi should really have his own restaurant for his awesome food. And so Papi’s Tacos was born. We were served a traditional Mexican drink, tamarindo – a citrus-based concoction (no alcohol) – and had our choice of either a chicken barbacoa or carne asada taco with a variety of salsas. I had the carne asada, which was very generous on the meat, and a little bit of some spicy tomatillo salsa. Delicious.

Papi’s Tacos runs a $2 Taco Tuesday night, which I already made plans with my husband to go to. They also serve handmade gelato, perfect for those hot summer days. This place is conveniently located right next to the splash pad along the Reedy River, which is an extra incentive to take the kids during the summer.

When given the option to take the elevator or stairs up to The Lazy Goat, our last stop, I eagerly ran for the stairs or I would have gone into a food coma otherwise.

This place gets rave reviews and I can see why. The servers were kind and prompt and the manager explained that the restaurant strives to have their diners really enjoy the food, sharing it with each other and savoring the entire experience together. They take their inspiration from Spain, Southern Italy and North Africa, among other countries in the Mediterranean region. A couple in our group were enthusiastic patrons of this particular restaurant, having dined here many times, and could not get over the branzino, a typical fish from that region of the world, and how it was prepared. I really have no idea how it was prepared except that it involved something like fifteen different steps. So I guess, if you go to The Lazy Goat, order the branzino.

Tonight we were enjoying a fresh, fruity, sparkling wine that fit perfectly with the dark chocolate tart with peanut butter anglaise and caramelized bananas that screamed my name.

And this is how I ended up in a fight between my eyes and my stomach. But, oh my gosh, that last bite was amazing.

Tempted to go with John on an At the Chef’s Table Culinary Tour? He runs them every Tuesday night and Saturday afternoon. They are perfect for date nights or getting together with friends. It doesn’t matter if you are a local or just visiting Greenville – you will enjoy this and learn just a little more about this wonderful place. Most of my fellow diners were Greenville locals and it was a lot of fun to meet new people and enjoy the experience together.

It’s $69 per person and that includes a drink, if you so choose, and food at every stop. Plan to spend about 2.5-3 hours there. Book your ticket here. John also offers a breakfast tour and a BBQ trail tour.

Have you ever been on the Culinary Tour in downtown Greenville?

Kristina Hernandez is a mom of two girls, freelance writer and photographer. Originally from New Jersey, she is in love with the Upstate and could not imagine raising her kids anywhere else. She enjoys hiking to waterfalls, kayaking, camping, cooking, and exploring all that Greenville has to offer. And she really loves baby goats. Follow her on Instagram at @scadventurer.

[…] you can travel to Greenville for, you can enjoy in Spartanburg. However, Spartanburg does not have The Chef’s Table Culinary Tour. For the foodies, this is a dream date option that takes couples on a walking tour to enjoy some of […]