When he was 13 years old, Joe Jackson earned a position on the Brandon Mill Baseball team. Historically, the mills played a large role in the evolution of baseball at the time; on Saturday afternoons when the whistles blew, the mill workers would swarm from the workplace to the local baseball fields, where they would practice for their games against mill leagues across Greenville County. Many communities such as Brandon Mill were brought together through their love of the sport, and more than one legendary player emerged from these mill teams, including Joe Jackson, Champ Osteen and Red Barbary. 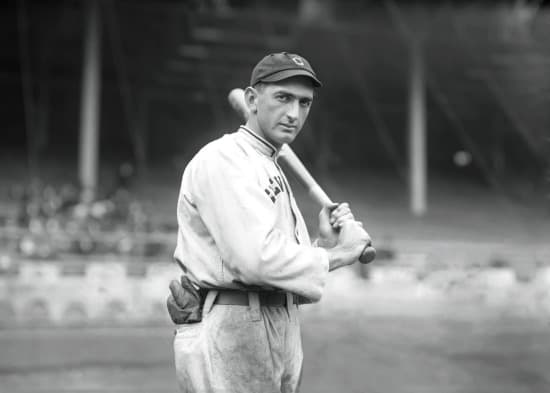 Joseph Jefferson Jackson earned the nickname “Shoeless Joe” during a mill game when the blisters from a new pair of cleats resulted in the player taking off his shoes off before his turn at bat. Legend goes that as he was rounding third base in his socks a fan yelled out “You shoeless son of a gun, you!” and the resulting nickname stuck through the rest of his career. In 1919 he was indicted in the Black Sox Scandal in which members of the 1919 Chicago White Sox participated in a conspiracy to fix the World Series. Although he was acquitted in 1921, he was still banned from playing baseball for the remainder of his career. Nevertheless, Shoeless Joe has one of the highest career batting averages in major league history (he hit .408 in 1911), and Babe Ruth is said to have modeled his batting technique after Jackson’s square stance. The historic Brandon Mill Community on Greenville’s Westside is now home to the 8-acre Shoeless Joe Jackson Memorial Park, the baseball field where Jackson first played baseball. The park is split in two by Brushy Creek, which continues on through Greenville until it empties into the Reedy River in Lake Conestee Nature Park; due to the historic pollution caused by the mills and ongoing hazards from urban runoff, it is not advised to play in the water.

On one side of the creek is the lighted baseball field with a small parking lot that is open when a game is on. On the other side of the creek are the playground, picnic shelter and parking. The two sides are connected by a small bridge on the very backside of the park, and informational placards on the park and Shoeless Joe can be found next to the concessions building on the backside of the baseball diamond – this is where you’ll find the answer to the 2017 Park Hop clues! When you’re park hopping through the Greenville County Parks this summer, make sure to stop by nearby Freetown Community Center for more Park Hop fun. The Community Center and playground is just 5 blocks away, making it an easy two-base hit!

Greenville is also home to the Shoeless Joe Jackson Museum and Library, Shoeless Joe Jackson Plaza at the gates of Fluor Field (where a life-size bronze statue of Joe stands on a base made of bricks from the old Comiskey Ball Park in Chicago), and the site of Joe Jackson’s grave where visitors leave baseballs, photos, notes and other mementos. Have you explored the Shoeless Joe Jackson Memorial Park?

Shoeless Joe Jackson Memorial Park is one of the parks in the 2017 Park Hop passport. To learn more about how you can earn prizes this summer by visiting local parks read our Ultimate Guide to Park Hop.

Mother of three young boys, Liene is constantly on the move since returning to Greenville in 2012. Whether she’s exploring the state parks and natural areas of the Carolinas or teaming up with other moms to organize activities for the kids, she’s always searching for the next adventure in the Upstate. For everything from hiking, travel, cooking and crafts to multicultural & global education posts, visit her blog, Femme au Foyer.

Mother of four young boys, Liene is constantly on the move since returning to Greenville in 2012. Whether she’s exploring the state parks and natural areas of the Carolinas or teaming up with other moms to organize activities for the kids, she’s always searching for the next adventure in the Upstate. For everything from hiking, travel, cooking and crafts to multicultural & global education posts, visit her blog, http://FemmeauFoyer2011.blogspot.com.